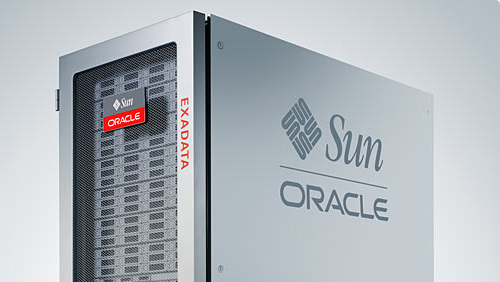 Ever since I postulated back in April as to what a combined Oracle-Sun company would do, in the back of my mind I've also been thinking what it would look like. Now we get a glimpse in the form of the Oracle Exadata V2 server, the second advertisement after their triumphant "Oracle Buys Sun" faux billboard graphic.

I'm surprised they kept the Sun Microsystems logo and the basic design of the hardware, but I'm even more surprised they positioned the Sun logo above the Oracle one. I get the feeling it's not something that should be read into much, but perhaps it's a symbolic tip of the hat and to appease people scared about what Oracle may do with Sun. Don't worry guys, Sun is still alive, and all that. Or maybe it's because "Sun Oracle" is much easier to say than "Oracle Sun". I have no idea what I'm saying here.

Most likely this is a transitionary product, we'll probably see completely new designs in coming quarters that probably won't include a Sun logo. Then again when Commodore Business Machines bought MOS Technology in the 1980s they ended up rebranding the subsidiary but it largely operated independently and still put their logo on all their integrated circuits, so who knows.

Personally I think it made far more sense for Oracle to be Sun's suitor instead of IBM given that they already had a lot of money and time invested in parallel products. Solaris is an excellent operating system, and an Oracle database on Sun software and hardware is a compelling mix.

I guess I'm still just a little sad to see such an iconic company slowly get eaten by another; as I've repeatedly said here I really admire Sun Microsystems. Perhaps I'll have a greater chance of owning my own Sun workstation after buying one on eBay after a few years. That is, if having original Sun hardware without an Oracle sticker doesn't increase its value too much.