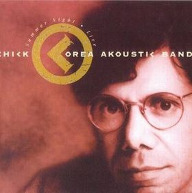 Finally, I had the time today to create a new article for my beloved WikiProject Jazz group on Wikipedia.

Summer Night: Live is a live jazz album by the Chick Corea Akoustic Band trio, featuring Chick Corea, John Patitucci and Dave Weckl. Recorded during a concert in Belgrade in 1987, it was released with Jazz Door, the former recorded and live jazz record label.

The set contained jazz standards from Miles Davis and John Coltrane, as well as several original quartets by Corea.

I could see why Wikipedians had skipped this particular album in Chick's discography; information about it online is scant. I was just lucky that we had the physical album here to reference! Oh yeah, and the music is friggen good too.