A recent map and scenario pack I downloaded for Train Simulator had me doing some street running, like a gentleman. It’s a bizarre feeling driving a train down the main street of a town alongside cars! I’ll save that for a future post.

In the meantime, I went looking for some photos in the real world where these giant diesel electrics drive down the street. This was a great example from 2007 in LaGrange in Kentucky. Thanks to SimRacin40 for sharing this with us. 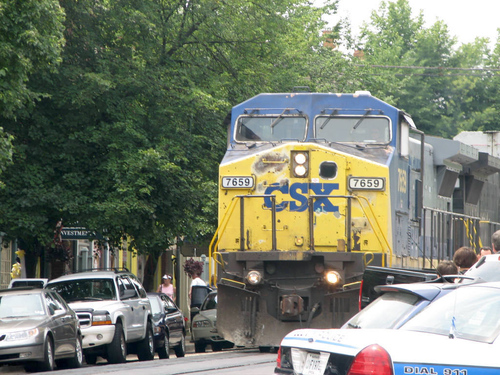 Now you can see why you wouldn’t want to get in the way of one of these things, either as a pedestrian or a car. I’ve been a train fan since I was a kid, but I still forget just how big they are. Even if they were idling their engines and coasting down the street, there’s a lot of inertia in that steel.