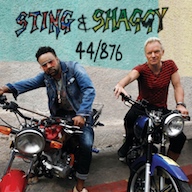 My coworkers and I are obsessed with this unlikely collaboration album that came out last month. This the first of many blog posts dedicated to each song, in the style of my Ben Sidran posts of yore.

The first is the titular track 44/876, taken from the country phone codes for the United Kingdom and Jamaica respectfully:

Shaggy and Sting in a combination! ♫

And the ghost of Bob Marley, that haunts me to this day.
There’s a spiritual truth; to the words of his songs.
And the carribean nation; to which they belong. ♫