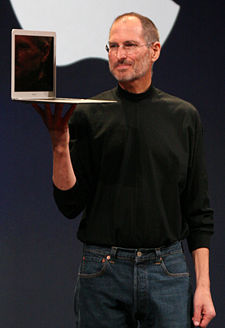 A bit of a belated post regarding this topic, but it's one I think still needs to be addressed. Photo is of Steve Jobs holding a MacBook Air at MacWorld Conference & Expo 2008 by Matthew Yohe.

It seemed Apple made up a phony excuse about the "reduced relevance of MacWorld" as the reason why Steve wouldn't be presenting the final keynote and dismissed rumours of his health, only later to backtrack when a letter from Steve was published.

I can understand. When my beautiful late mum was going through the last few years of her own battle with cancer and the side effects of the chemotherapy, she didn't like anyone in the outside world to know she was ill because she was scared of being treated differently, and she wanted it to remain in the family. Life threatening illnesses do generate some weird responses from people, during high school people even treated me differently just because I was the guy with the terminally ill mum. Some of that treatment was nice, some really wasn't.

Steve Jobs' health should not have been made into a public spectacle, no matter how important some shareholders perceive him to be to the value of their stocks. Yes, that's how shallow I see these people as. Morals and ethics of business have long been oxymorons, but personally I take two things seriously: health and family. Both should be off limits.

When someone is going through a crushing illness like that, the last thing they need is back seat doctors, media speculation and endless strings of questions by people who should know better. "Should" being the operative word.

I wish Steve the best in his recovery and hope he's spending some quality time with his family. Don't let those arses in the media get to you sir.