It’s December, so time to crack open the drafts vault and publish a post that never was. This was from mid-2016, but seems precient given what happened in Australia last week.

Diving, badminton, and table tennis are the only Summer Olympic sports I’m interested in, mostly given I knew people who played them. When you know what to look out for, it’s easier to appreciate. The latter two are also the de facto national sports of Singapore, and I like seeing my tiny, adopted home facing off countries with orders of magnitude more people!

Which reminds me, why is squash still not an Olympic event? It requires skill, and is fast-paced to keep people’s interest. It’s also one of the few sports I played decently in high school (cough). But I digress. 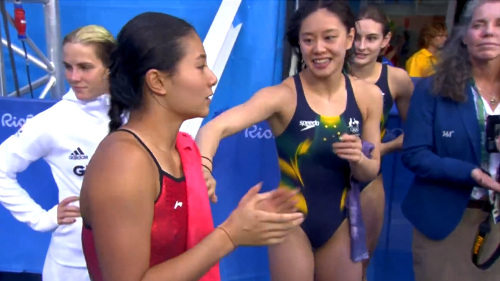 In this hyper-competitive atmosphere, I like it when some humanity shines through. In the scene above, a member of the Australian team tapped her Chinese opponent to shake her hand for her amazing performance. It wasn’t the stilted, formal handshake mandated by certain sports before starting, it was spontaneous awesomeness.

I wish there was more of that everywhere, not least Olympic sport. Some pretty Free! boys would have done it too, I’m sure.