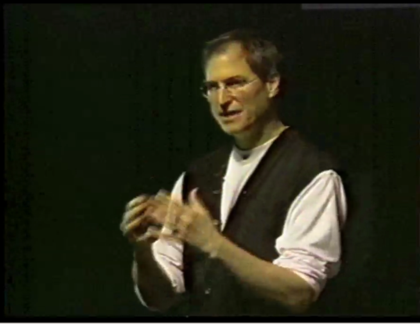 Steve Jobs at the 1997 Macworld Expo

At a time eerily close to when I was writing my previous post about Steve Jobs' health and the end of MacWorld, it seems a rumour is spreading that Apple may in fact appear at CES:

Apple is ditching MacWorld to instead exhibit at CES next year instead, according to one source.

The source, citing “friends who work at Apple,” insisted the company is ditching MacWorld because it will “go large” at CES, which typically runs concurrently with MacWorld in early January.

The International Consumer Electronics Show, or CES, is the big annual gathering [of] the consumer electronics industry. Held in Las Vegas over several days, it attracts more than 2,700 companies from all over the world, including technology giants like Microsoft, Sony and Nintendo.

Apple has never had a presence at the show, exhibiting at MacWorld instead.

While I love Apple products and the Mac OS X operating system, if Apple does something that I think is stupid or if they're caught making something up, I call them out on it, as I hope I do with every technology company who's products I use and endorse.

I will be interested to see how Apple's diehard apologists explain this after they've been explaining Apple's decision to leave MacWorld was about giving up on expensive trade shows. If this CES appearance rumour is true, that whole argument has just been shot down in flames.

I'll be most interested to see Daniel Eran Dilger over at Roughy Drafted explain this. I've thought his coverage of Apple related topics have been spot on in the past, but his post last year about why Apple ditched MacWorld was uncharacteristically shaky. Will he be able to reconcile this CES appearance after he's been saying the trade show paradigm is dead and Apple ditched MacWorld to save cash and to release products on their own schedule instead? I don't see how he'll be able to do it.

Then again this is just a rumour, and as with most rumours I suspect it's bogus. If it turns out to be true though, prepare to read some serious backtracking across the blogosphere!