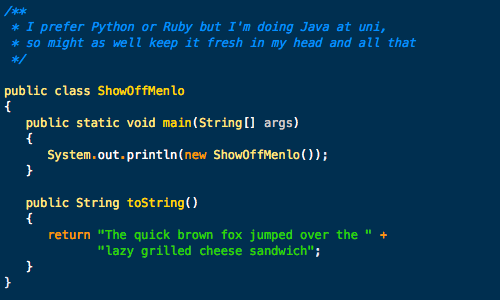 I remember reading on one of the Mac forums I frequent that somebody thought it wasn't the major changes that Apple makes to it's software that set it apart from other vendors, it's the little, less publicised things that make their systems that much more of a pleasure to use in little but meaningful ways. Aside from a couple of of blunders I completely agree.

Case in point, Snow Leopard comes bundled with a new monospace font called Menlo which is shaping (ha, pun) out to be one of my favourite new features. If you haven't noticed it, launch Font Book.app and bask in its awesomeness!

If you're on Snow Leopard reading this, you should be able to tell the difference:

This is Monaco, my previous favourite
This is Andele Mono, from the Home Brew Terminal theme
This is Menlo, my new favourite monospaced font!

I'm not a graphics designer so I don't know the language I'm supposed to use when describing fonts, ligatures, serifs and the like but Menlo is brilliant. It's as if they took Monaco and Fixedsys from the early Windows and DOS days and made a slightly more "retro modern" typeface. Because each character is slightly shorter, lines of text also seem more evenly spaced. The font smoothing and anti-aliasing also look really good.

As much as I love Linux and FreeBSD desktop environments like Gnome and Xfce, the presentation of fonts and typefaces still keep me looking forward to programming and working on my Mac above all else, though they are improving in leaps and bounds. I don't consider Windows to be a viable contender with it's subpar onscreen font rendering.