Because one of my main production machines is a Mac and I'm addicted to Twitter, I'm always on the lookout for changes in the Mac Twitter client landscape. That was a sentence that stated the obvious if ever I've read one.

So anyway I downloaded the latest version of the Snitter (Snook's Twitter) client because it includes a custom Leopard skin: 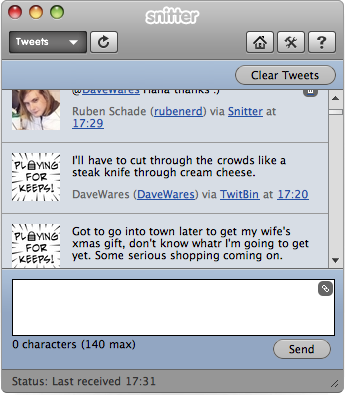 Ironically even though it fits nicely into my Mac desktop environment, I still prefer the pink colour scheme! And the best thing? No advertisements!

Now to be fair Snitter is of course an Adobe Air application which means it's really clumsy to install and upgrade, and doesn't work the same way native Mac applications do, through no fault on the part of Jonathan Snook of course.

Because I run my day-to-day account on all my machines as limited accounts for security reasons which I may dedicate a post to soon, installing Snitter requires me to log out, log in as my administrative user to install Adobe Air, the install Snitter, then log out and log back into my limited account. With most Mac applications when I attempt install it asks me for an administrative password which negates this time consuming step.

That said though Snitter still is the best Mac Twitter client. Twitterrific used to hold that position for me, but forcing ads on it's users in newer versions unless they pay money was really not a cool move… but that's for another post ;).