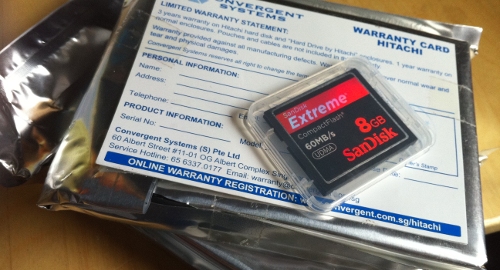 My old man came back from his business trip to Singapore, and with him he brought some swag from my old haunt.

I know that icon is technically a SmartMedia card, but it was just too cool to pass up ;). I still have a MadPlayer and music player that use those cards. They're flexible. They're like the 8.5 and 5.25 inch floppy drives of the memory card world. But I digress!

I've always had an obsession with retro laptops, but their hard drives have been kicking the bucket. Fortunately they're easy enough to replace with adaptors and Compact Flash cards.

On his last trip, Mr Schade Senior was alerted to 60MB/s cards which are much faster than the existing ones I'm using. The fact they only have an 8GiB capacity is just fine given they're replacing crusty old drives that are all smaller anyway!

My Armada M300, Libretto 70CT and iBook G3 are lining up to have these cards installed :D

I could regale you with tales of horror with Seagate and Western Digital drives, but (touch wood!) I've had nothing but great experience with Hitachi drives (and IBM units before Hitachi bought their storage business). They're somewhat pricier than other manufacturers, but I trust them. Holding a Hitachi and WD drive in each hand I could also swear the Hitachi was heavier too, but that could just be me.

Unfortunately higher capacity drives are still too expensive per gigabyte even in Singapore, but now I've maxed out my DIY Sim Lim Square tower and my Mac Pro with 2TB hard drives! Omnomnom!

I have rsync operating as a cron job keeping these machines syncronised, and one remaining external hard drive backs up my critical work every few weeks before I take it back offsite again. I would use a cloud backup service, but I don't trust the cloud. It's not that I don't trust them from a technical or ethical standpoint (they do good work), I flatly don't trust lawmakers. Hey, like Google and IPv6! Metered Aussie internet also kills it, as it does many other things.

I just can't believe less than a year ago I was using a MacBook Pro as my production machine and what I dubbed my "Stonehenge" of external hard drives! Honestly, five external drives each with their own FireWire cable and power supply brick, what a mess!

Sigh, I miss Singapore. Friends. The food. The electronics. The public transport. The all week late night shopping. The ultra high speed, unmetered internet. 3G phone service everywhere. Modernity. The safe clean bubbleness. The more intangible feeling that I'm a part of a global community. Aiyo, I even miss Singlish one lah.