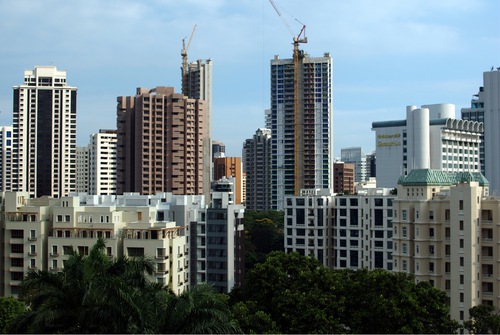 Twitter has become such an integral part of my life that I sometimes forget most people don't use it. Probably everyone else has this thing called a "life" which I hear so much about.

This was a photo I took outside my bedroom window yesterday afternoon after I'd finished a coding session. Since the last time I was in Singapore back in March I can count two new apartment buildings and several more under construction. Time-lapse photography over a period of months would be pretty cool from here, I can tell you that!

What gobsmacks me is how ridiculously tall some of these apartment buildings are becoming. In Australia there's the Eureka Tower and Q1… and that's pretty much it. Then again, Australia isn't trying to cram all it's population into a minuscule island dot!