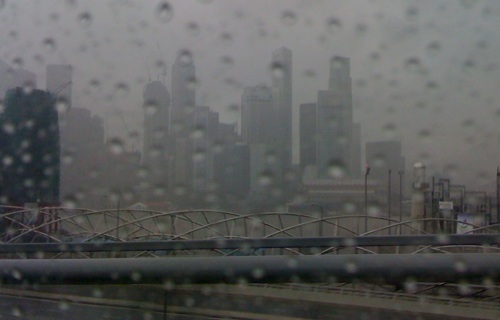 We knew it was a big story when our trending topic eclipsed the #WorldCup, yeesh!

Picture this if you will

So it was quite early in the morning and my dad and I were in our rental car heading to our self storage room thingy to load up some boxes. As we left the apartment we noticed the clouds was dark even by Singapore tropical storm standards, but fortunately it was only spitting. We thought the sky had better be careful, because spitting in public here is an offense punishable with a steep fine.

Move forward ten minutes and we were on the PIE and the visibility was so poor we could barely see the car in front of us. As a consequence, traffic was moving along at Bangkok speeds; at one point a poor person in what looked like was once a clean pressed business shirt vainly clutching a newspaper above his head was moving faster than we were.

You get used to tropical storms living here, but these onset of these freak storms are so sudden you can never be prepared for them! One such surprise was seeing the banks of the deep canal that runs along Bukit Timah Road almost full to the brim, and people soon started flooding (hah, sorry) Twitter with photos of Orchard Road (dubbed the Times Square of Southeast Asia!) completely flooded with people attempting to get out of submerged cars and buses.

My dad and I were so nervous driving with all the incoming water we pulled into Jelita and had a sandwich and a cup of coffee, as I blogged earlier. That part of the day was good :) 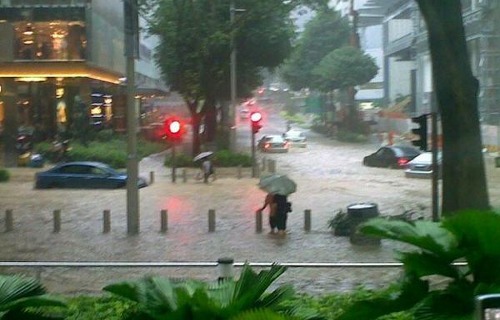 Given it's location and the fact the whole country is built on a shallow island barely wider than a 40km diameter grilled cheese sandwich, the Singapore government spends a ridiculous amount of money on storm water drainage systems. Back in 2007 they figured the Dutch of all people would have experience with building water control systems so they imported the world's largest water pumps:

SINGAPORE : Singapore’s flood control measures will go one step further after the Marina Barrage becomes operational by the end of this year.

Works are currently underway to install drainage pumps next to the reservoir. These pumps are the world’s largest and are specially brought in from the Netherlands. Their job is to drain out excess water during flooding. Each pump weighs 28 tonnes, or about the weight of 400 men.

When operational, it will be able to drain, in one minute, an amount of water that can fill up an Olympic-sized swimming pool.

Perhaps they need to put in a few more of these bad boys after all ;). 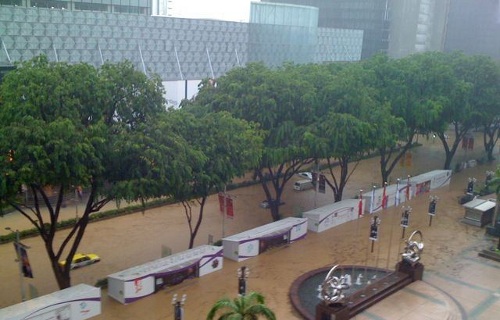 As expected Twitter was all abuzz (sorry Google!) with the news, with people uploading all kinds of amazing photos. My dad and I were driving around the Marina Bay area so we didn't see any flooding, but I took a few crappy camera phone pictures of the city obscured by all this heavy rain.

I really, REALLY need to start carrying around my DSLR and lens everywhere, my D60 with the NIKKOR 35mm f/1.8 barely weighs anything so I really don't have an excuse. They would have taken some amazing shots today. Oh well, live and learn.

As for Orchard, I just walked down it a few minutes ago and the water seems to have receded, though the whole area is full of police cars. I commented on Twitter that I wasn't sure what police expected to do, unless they were going to attempt arresting the flood water. I suppose they could freeze it then handcuff it.