A news story about lightning strikes in Singapore lead me to the Singapore Civil Defence Force site, which has a ton of super cool posters and handbooks. Naturally, many of these have to be printed ^_^.

First, to the story that sparked this post. Given the wild rain in Sydney again today, this news article from the Jakarta Times of all places seems oddly precedent:

[..] especially as Singapore is one of the lightning capitals of the world.

It also experiences an average of 186 days of lightning per year, according to the National Environment Agency (NEA). This is due to the tropical weather conditions. Each square kilometer of land in Singapore can be struck up to 16 times each year.

That's puts Singapore ahead of the UK in number of strikes on people a year, though far less than the United States. Per capita you've got to think that's awfully high though for a country that's less than 50 kilometres wide! 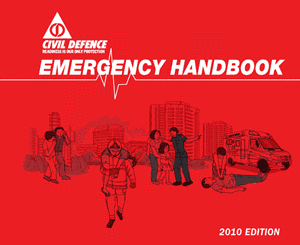 Anyway, the Jakarta Times article mentioned the Singapore Civil Defence Force website had a handbook detailing how to survive lighting storms. Given the rain is pelting us here in Sydney, I figured it could have some advice. Right?

What I didn't expect was an entire site with posters ranging from workplace safety, to fire hazard guides, to earth tremors, to posters detailing emergency procedures and handbooks… it's a veritable treasure trove! All are downloadable in PDFs, and in the English, Mandarin, Malay and Tamil, the four official languages.

Unfortunately, this one about fire preparadness made me hungry.

We have an A3 printer, which for now has mostly printed anime pictures and scans (cough!) for walls and so on. I think I may have found a new source of posters!