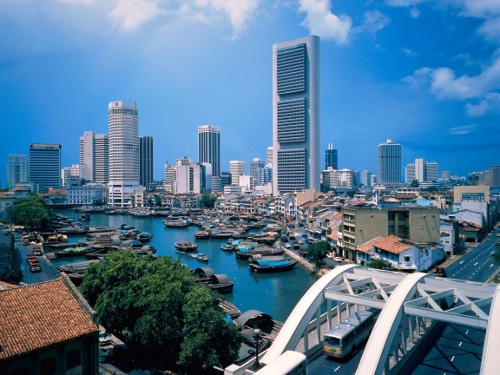 Ruben attempts to guess the age of a photo, for no reason!

While looking for recipies for Singapore noodles this evening on The Googles, I came across the IKB Travel website advertising the city state and all its attractions. What caught my eye though wasn't the links to the Singapore Zoo or any of the other thingy whatnots (they're technical travel terms, look them up) but rather the photo they had chosen to accompany the page.

If you aren't Singaporean or haven't spent any length of time in the city state you could be forgiven for thinking the photo is current, and presumably the travel agent folks (or their website designer) clearly thought it was or they wouldn't have included it! That said, those with an eye for detail may notice a few things that give away the photo's true age:

All these point to one unmistakable conclusion:

This is a retro photo of Singapore!

One of my loves (dare I say, passions!) is finding old photos of places where I've lived or been to, and comparing it to what I've seen myself. Particularly with South East Asia in the last thirty years, cities in countries such as Singapore, Malaysia and Thailand have been almost completely transformed. I find it fascinating :).

So how old is this photo? Well judging from the fact virtually none of the skyline is there yet, I'd hazard a guess that it was taken in the late 1970s. This is corroborated by the fact the recognisable triangular tower of the OUB Centre isn't visible yet, nor does it even look like its under construction! According to Wikipedia, they started building it in 1980. 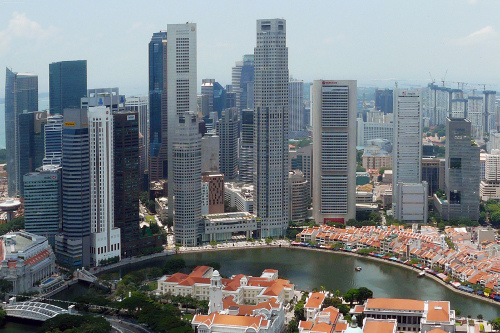 For comparison, here's a photo of the same area of the Singapore River in 2010, by chensiyuan on Wikimedia Commons. The building locals sometimes call the "calculator building" is almost the only thing that looks the same!