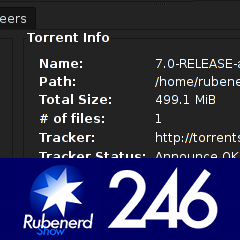 40:24 – A rant episode in response to a new technology reported by Webware and an article calling the exposing of P2P as a red herring; talking about net neutrality, attacking symptoms not causes, RIAA/MPAA inspired bullying tactics. Not the same calibre as a Jimbob Kloss rant but I try my best!

Also briefly talk about a fascinating interview article from Slashdot from the inventor of C++, and the internets are working again at home!