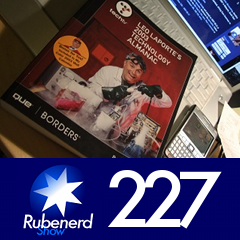 Some overdrive audio errors in parts of this episode. I've calibrated this new mic for the next episode.