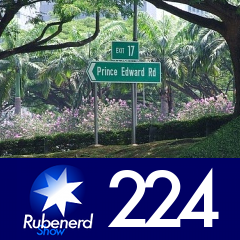 There's a bit of voice distortion in parts of this show. I'm obviously out of practice, the next one will be much better!