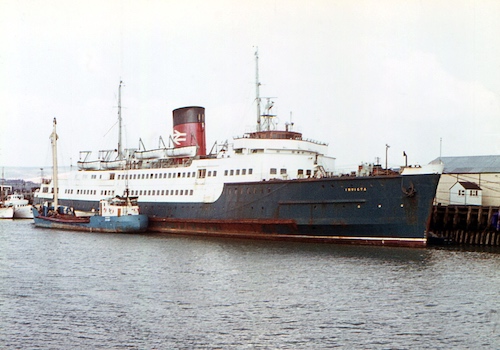 This was such a great story, and one I’m sure British developers all know about. Does the above look like a train to you?

I was reading the history of TOPS, the Total Operations Processing System developed in the late 1960s and used most successfully with British Rail. The Wikipedia article for the system stated:

One oddity was the inclusion of British Rail’s shipping fleet in the system as Class 99.

I had to look that up further. Sure enough, on the British Rail Class 99 article:

The British Rail Class 99 was a fleet of ferries or train ferries, most of which were owned by Sealink, that carried rail vehicles between Britain and mainland Europe.

And specific to TOPS:

When British Rail implemented the TOPS system [ed: noooooo!] for managing their operating stock, these ships were incorporated into the system in order to circumvent some of the restrictions of the application software. This allowed them to be counted as locomotives while carrying railway vehicles in the same way as a normal locomotive would haul a train.

It’s a brilliant hack. What’s a railway ferry but a larger locomotive conveyance pulling a train through water? From the software’s perspective, they have timetables, arrival and departure “stations”, depos, drivers, and maintenance windows. Thesedays the attached GPS might succumb to a conniption fit if it saw a train bobbing and moving around like that; it could unintentionally flag entire oceans as needing track maintenance.

My last post talked about bridges. I’m sure the system had to be reworked when the Chunnel opened. That would have been a pun with greater pulling power had that not been a tunnel.