Before the Petronas Twin Towers, the tallest building in KL was the 421 metre Menara KL (KL Tower). I went there as a kid back in 1997, but a lot had changed since, and Clara and I have since developed a touristy obsession with observation decks.

The remaining yearly haze from the Indonesian forest fires was still lingering in the sky a bit, which you can tell from the photos. But otherwise the view was amazing. This was the view of KLCC from the open-air Sky Deck: 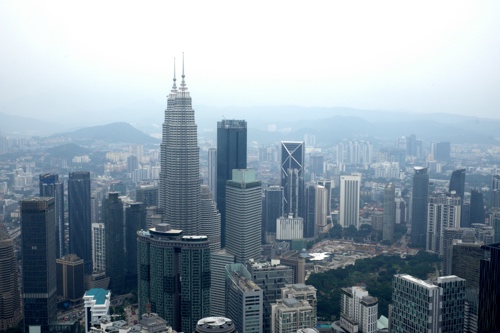 There’s a tiny cafe on the top floor, with what’s probably the most expensive coffee we’ve ever bought! But the view was worth it, just as it was back in Hong Kong.

You can get a few different shuttle buses up there, but Clara and I walked down Jalan P Ramlee from KLCC, then up Jalan Puncak. It was maybe half an hour or so, then maybe fifteen minutes to get back to the monorail line to head to Lot 10 and Berjaya Times Square where I’m typing this now!