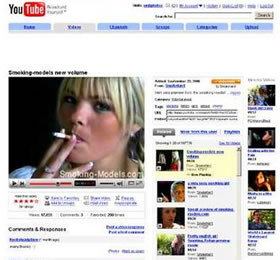 The Sydney Morning Herald website is reporting that YouTube has been flooded with videos depicting young people smoking. While there appears to be no direct evidence that these videos have been posted by tobacco companies, the speculation is there.

IS THIS the last frontier in tobacco marketing or simply a global stage for the look-at-me generation?
Thousands of videos of sexy, smoking teens are appearing on the internet phenomenon YouTube, possibly being posted by tobacco manufacturers to recruit the next generation of smokers.

Quite frankly I don't have a problem with cigarette advertising. The way I see it, with all the information and evidence available thesedays about how dangerous smoking is, if you're stupid enough to start the habit you deserve all the medical consequences. I like to think of it as natural selection at work ;). The only thing I resent is when our tax dollars have to pay for these people's self inflicted damage in hospitals.