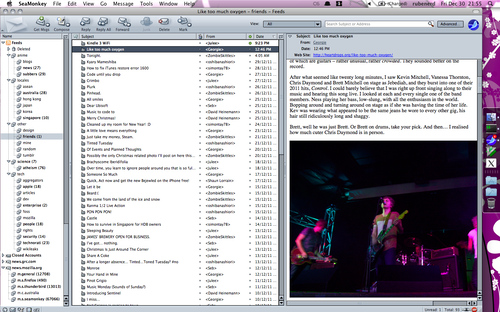 In the spirit of @Jeorgina consolidation, I decided to see if SeaMonkey could also be used as a Google Reader replacement!

Many of these tips should also work in Thunderbird, but I haven’t tested it. Feel free to leave a comment with your own experiences if you choose to try it out!

Setting it up for feeds

SeaMonkey Mail (SMM) works around the concept of accounts. Much as you would create a new email or newsgroup account, to subscribe to web feeds you create a special "Blogs and Newsfeeds account."

In your SMM sidebar, you should now see an account with the familiar square orange web feed icon alongside your mail and newsgroup accounts. Consolidation and simplification to the MAX! ^_^

As I found with Google Reader, creating folders to organise your feeds is easier to do before you subscribe to feeds. 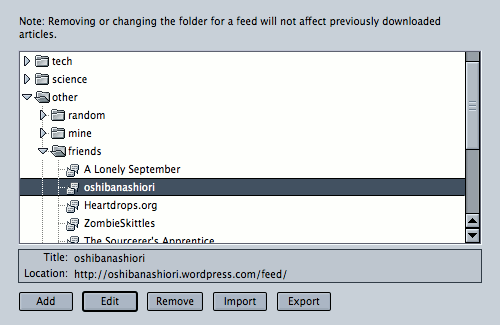 One thing that caught me out initially was that SMM downloads article from feeds into folders like email, rather than just displaying them in folders like Google Reader. As Mozilla notes:

Removing or changing the folder for a feed will not affect previously downloaded articles.

If you decide to change the folder for a feed, this just means you need to drag and drop any previously downloaded entries into the new folder as well.

I've been using SMM to read all my web feeds for about two weeks now, and so far it's been a more than capable replacement for Google Reader. Having my feeds in the same window as my newsgroups and email accounts has also been so gosh darn convenient!

Downloading and using SeaMonkey (or Thunderbird) just for web feeds might be overkill, but if you already use it, give it a try with your feeds. I'm thoroughly enjoying myself :)