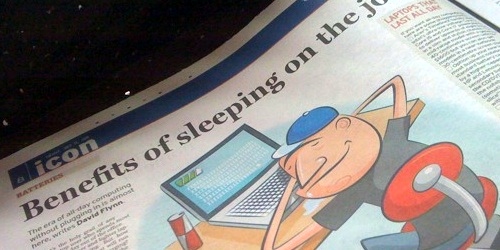 Grabbing a quick coffee at our local deli this morning I happened upon an article in the Sydney Morning Herald by David Flynn talking about the utopian idea of all day battery power. Where do I sign up? :)

Quoting Mooly Eden of Intel, in the article he discusses the counter intuitive idea of having more powerful processors to save battery life given they can finish a task quickly and go back to idling which uses less power. I hadn't thought of it that way before! He also touches on SSDs which draw less power and turning off services such as Bluetooth and WiFi which make sense.

Two small observations though; one was his description of more energy efficient displays in column three:

That said, notebook screens with LED backlighting draw less juice than the non-backlit models, while also providing a brighter picture.

Granted I'm a computer science student not a computer engineer, but AFAIK the benefit of LED displays isn't that they're brighter than regular backlights, but that they draw less power for the same luminescence. Well okay I suppose that's just a subtle distinction :).

He also mentions "non-backlit models" which technically isn't true; while contemporary laptops lack LEDs they do have florescent tube backlights. High resolution colour LCDs would be impossible to read without any backlight at all, you can try this out by turning the brightness on a notebook display to 0%.

Last year the inverter for my MacBook Pro's backlight failed which made the screen virtually impossible to use. Good thing I was able to fix it!

Finally, in the last column where he discusses old laptops and battery life he makes a good point:

After a few years your laptop’s battery will be wearing down and running at much less than its original capacity. You can buy a new battery but you’d be better off buying a new notebook.

We could make our houses more energy efficient, but we'd be better buying a new house ;). I kid in jest, it is a good point but for some of us we don't have the luxury of buying new machines every few years just because the battery is dying!

While it is true newer computers are more energy efficient and come with more sophisticated batteries, that isn't to say people with older machines can't also benefit. As a out-of-left-field example, my ancient Toshiba Libretto 70CT notebook originally came with a nickel cadmium battery which was almost as heavy as the rest of the machine, had the dreaded memory effect and simply didn't provide many hours of use. Replacing the innards with lithium polymer cells reduced the weight of the whole notebook and gave it more battery life than when it shipped new!

Is the notion outdated anyway?

My last thought is: could the idea of a full day's battery charge be achieved not by carrying around heavier computers, but by using lighter devices like iPads (or equivalent knockoffs that will no doubt be sprouting up everywhere) for some of the time? I wrote this entire post on my iTelephone for example, and the battery is still going great. If we had reliable phone infrastructure, could it be conceivable that some of our data be in the cloud so we're not tied to just one machine [and it's battery] during the course of a day? Just food for thought.

Wouldn't it be fantastic if we could recharge our own energy as easily as we could recharge a computer? Eh, on second thought maybe not, we'd have lots of energy when we were born, but by age three we'd barely be able to leave the house for a few hours before dropping our heads into bowls of soup and making royal arses of ourselves. I already embarrass myself with terrible jokes and a poor fashion sense in public as it is.

Curated by hand! I really should install a plugin to do this for me one day.