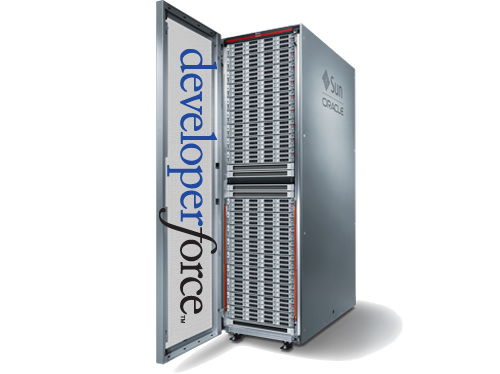 Isn’t it amazing how a small hiring decision can spark a whole discussion in the news media that ultimately doesn’t prove anything?

Remember when it looked as though the relationship between SalesForce.com and Oracle couldn’t get any frostier? Julie Bort writing for Business Insider in 2012:

Larry Ellison and Marc Benioff are taking their growing rivalry to the next level. [..] On Friday, Salesforce.com announced it wants to hire 40 to 50 people next year to work on a “big project” using the open-source database PostgreSQL—a big threat to Oracle’s core database offering.

Since this hiring revelation, speculation has been rife that SalesForce were preparing a monumental rewrite of their system to run on PostgreSQL. It’d likely be possible; Postgres increasingly has many of the enterprise features that make Oracle so appealing, such as concurrent revision control.

Throughout this year, the speculation only kept growing, bubbling as it were like a rather lovely supposition soup. Larry Dignan writing for ZDNet earlier this month:

Salesforce has been increasingly looking into PostgreSQL, an open source database, and hiring people who could provide some alternative to Oracle. The rationale is clear: Salesforce needs to diversify away from Oracle’s databases and potentially rearchitect for the future.

Well, it appears this rearchitecting will come from a familiar place. Chris Kanaracus writing for IDG:

In a coming together of rivals, Salesforce.com and Oracle have signed a nine-year agreement under which the companies will integrate their technologies and Salesforce.com will make a significant investment in Oracle products for its cloud computing platform.

Salesforce.com, long a user of Oracle’s database, will standardize on Oracle’s Linux OS distribution, Java middleware and Exadata server platform, as well as continue to use Oracle’s database, according to the joint announcement on Tuesday.

I would love, love to know how that went down. One can imagine Beinoff and Ellison butting heads until the last minute, or cackling at the idea that they’d convinced the media of an elaborate rivalry of a former protogé and his teacher. Or maybe it was a far more boring—and typical—business arrangement with concessions made and bridges rebuilt.

In any case, SalesForce will be remaining a thoroughly Oracle shop. For a largely database-driven system with hardware and software requirements and a large, entrenched Oracle codebase, you can see how they’d argue it’d make sense.