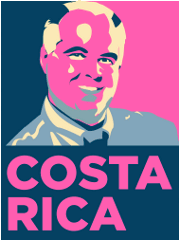 This is social media and Web 2.0 at its best: working to help a good cause!

Rush Limbaugh, an "opinionated" radio talk show host in the US, claimed he would move to Costa Rica if healthcare reforms were implemented. To help him out, a website has been set up by two guys in Brookyln, New York to pay for his trip out of the US now that health-care reform has passed and the end of American society is imminent, just as Massachusetts has gone to Hell since allowing same sex marriage.

Recently, a number of interesting things happened. First, Rush Limbaugh said on his radio show that if the Healthcare Reform Bill passed, he would go to Costa Rica. Second, the Healthcare Reform Bill passed. As you can imagine, this has made a number of people very excited. We are among that number. We want to make sure that Rush is able to make good on his promise, and so we’ve made this website.

But is it just a joke, or are they sincere?

Are we really going to contact Rush? Absolutely. We’ll video-tape and post the results here. We promise.

And it gets better. The owners of the site promise that if he gets cold feet, they'll donate the funds to a planned parenthood organisation. He doesn't want to be seen supporting them… surely?

Personally I'll be supporting Electronic Frontiers Australia instead, but good for a laugh anyway! I can't wait to hear how he spins what he said to justify not moving. I'm sure plenty of his fans will volunteer some advice. For one thing, Costa Rica has universal healthcare and no standing army. Does he really want to go to a place like that?

Sarah Palin will probably be happy she'll has one less competitor for the top job, by golly, you betcha!