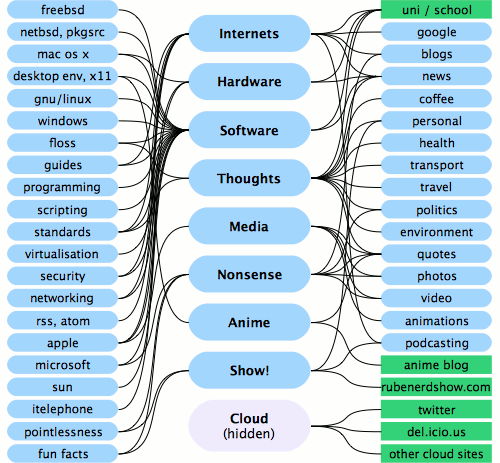 UPDATE: This post should be considered hysterical… wait, sorry…. historical, because I’m fickle and decided to change it back to the Rubenerd Blog. When I saw all the names I’d have to update on all my profiles everywhere and all the people that linked to me, I dropped to the floor and hit my head on the side of the table as I did so. True story.

I guess at least I did get all my stuff merged here. It was painful.

It is with great pride while I incessantly sneeze with spring hay fever that I announce the renaming of the Rubenerd Blog to:

The new name reflects the fact I was sick of the old name, that I folded so much other material from other sites of mine into this in the last few months, and that I've merged so many friggen metadata categories and other such nonsense into simpler categories that actually make sense. I thought it was a clever pun. Oh yeah, and I always sided with Jerry Seinfeld in thinking the word "blog" sounds like a condition with the nasal passages. Speaking of which, I have terrible hayfever, not sure whether I told you.

This is riveting news, I expect I'll be getting calls from major news outlets shortly. I hear Richard Quest wants to dedicate an entire Business Traveller episode to it, and Jim Kloss wants to book me for a speech at the Wheat Palace. I hope they're both willing to pay for my airfares to London and Talkeetna, I'll be blowing all my savings on a new laptop given my MacBook Pro from 2006 kicked the bucket. What did the bucket ever do to deserve such treatment?