Monday 12th March UPDATE: I have received an email from Robert Meyer today suggesting I misunderstood the intent of his article. He still asserts that "socialism [has become] the dominant economic paradigm" which I find somewhat confusing given current economic indicators, but he has offered to go on the Rubenerd Show to clarify his position.

This article was originally for university; don't worry this isn't what I normally blog about!

If I've said it once I've said it a dozen times, World View Weekend website writers shouldn't try their hands at economics!

Today for my economics report I will be focusing on the dubiously titled "Charity is Not The Government's Duty" by Robert Meyer; the same writer responsible for a long winded and illogical five part series on why he isn't an atheist (it has to do with the fact we have no morals and we're not logical apprently).

It's not entirely clear whether or not Mr Meyer's writing is the result of a lack of understanding (which can be forgiven and corrected) or whether he truly harbours contempt for people in lower economic brackets than himself. For his sake, I hope it's the former.

It's apparent when you start reading that you needn't take his words seriously:

A statement that appeared in a recent piece from a liberal columnist, underscores and epitomizes the theme of much of what he has written in past columns.

Which liberal columnist Mr Meyer? Who are you talking about? Guess it's easier to misquote someone and use their work against them when you know you readers can't find out the information for themselves and see through your deception.

But I digress. Mr Meyer's real intention seems to be to discredit the notion that national governments have a responsibility to help poor and disadvantaged people. The antithesis of Robin Hood, he argues that any redistribution of wealth is just theft:

The same thing in principle that would be considered theft if it was perpetrated by one private party against another. Naturally such pilfering is excused, and even applauded, under the moniker of “compassion.”

Compassion… a quality seemingly Mr Meyer has no desire to posses. Again, I hope I'm wrong.

His trademarked (and possibly unintended) hypocrisy which seems to appear in every one of his articles makes it's way into his current argument when he explains that poverty can't be eradicated by throwing money at it, but rather solving the structural problems that cause it.

We must ask if there are underlying patterns that lead to dire financial straits, which can be averted by changes in behaviors. It has been suggested that much poverty can be eliminated by doing four basic things:

Now clearly Mr Meyer is right; those four points are valid and would definitely go a long way to solving the structural problem of poverty. His mentioning of these though is hypocritical because how does one go about solving these problems? Through the method of "compassion" he just blasted: government funding! <!–It's slightly amusing that Mr Meyer blasts public expenditure as silly "compassion", then lists ways to solve the structural problem of poverty that are dealt with through the method he just rejected. –>I'll give an example: well funded government schools that help raise education levels and eventually the living standards of children; doesn't this sound like a way to solve the structural problem of poverty? I'm sorry Mr Meyer I'm confused… you're arguing against yourself.

Another possibly unintended flaw in his logic seems to stem from his unwavering belief that if governments help poor people financially then charities would cease to exist through competition:

I believe that it is the job of public charities, religious organizations and benevolent persons to help those in need. Man’s duty to his fellow man is a question of conscience, not a duty owed to the state. Public “charity” which is obligatory destroys private charity which by necessity is voluntary.

This had me chuckling again; not just because it lacks basic, grade level economic understanding but also because it has relevance to one of his previous articles. Mr Meyer, look at what you've just said about forced morals instead of concience and then look at your arguments against atheism (lack of forced morals in light of supposed "concience"). You do understand our position afterall it would seem!

But I digress… again. His belief that private charities help people is noble and is true, but as I said he makes a fundamental mistake. Ignoring the fact that most religious organisations are not actually "charities" because they give money to people with religious strings attached (religious extortion), his assertion that only private organisations should be responsible for aid fundamentally goes against basic laws of economics. 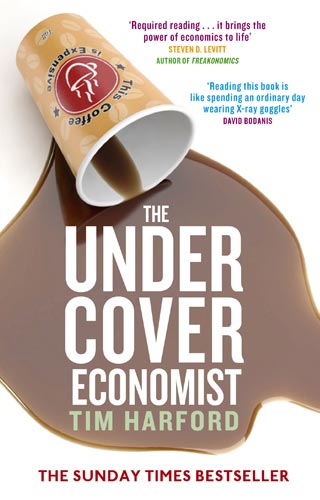 Why do we have government supported welfare programs if the private sector is so good at it? Any economics 101 class will teach you that poverty is a market failure, meaning that in a purely market based economic system there will be people living in poverty. By definition then it's the responsibility of the public sector to pick up the slack. I could write for paragraphs explaining this, but instead I recommend reading The Undercover Economist by Tim Harford (Exposing Why the Rich Are Rich, the Poor Are Poor–and Why You Can Never Buy a Decent Used Car) to see how this mechanism works. It's a very good book to read anyway if you want to understand opportunity costs, external influences and the necessity and effects of government and private market intervention.

All of that aside, the part of Mr Meyer's article that I really objected to (and I sincerely hope I was wrong about his character on this) was his assertion that poor and disadvantaged people are simply lazy and that any financial assistance that a government gives to them will always be spent foolishly:

An attitude of entitlement has a huge blindspot; it tolerates the perpetual condemnation of greed while condoning and encouraging the masses to covet those individuals who are better off financially.

A government that offers give-away programs to its poorest citizens would seem unconcerned about the various reasons for poverty, rather than focusing on how people can avoid the spiraling generational cycle of perpetual indigence and dependence on tax-funded welfare programs.

I'm sorry to say this sir, but what a load of rubbish. Of course with any freely provided assistance there will be people that will exploit and unfairly take advantage of it, but to say that all poor people are self-indulgent and selfish is a spit in the face of the majority of decent, hard working, responsible people who truly are suffering and require financial assistance to make ends meet for themselves, their families and their communities. To even entertain the notion that all poor people are "greedy" and indulge upon government welfare is akin to saying that all Muslims are terrorists. It's a most disturbing assertion and one which I hope was not intended.

Ironically enough even though I'm an atheist I can see that even his logic as a Christian seems to be flawed in certain respects:

Secularists are constantly bemoaning lack of “separation of church and state,” as it applies to public policy. But the doctrine of obligatory redistribution of wealth that the liberal columnist views as social justice, turns out to be a classic greatest example of rendering unto Caesar what is not Caesar’s; thus, in effect, deifies the state. That, in a nutshell, is the religious dogma of “progressives.” Their measure of morality is not personal conduct, but deference and sponsorship of the “correct” social positions.

As I said I'm an atheist but I can and do respect some of the qualities Christianity supports such as loving thy neighbour and loving the sinner even if you hate their sin. It seems to me though that this compassion and love for our fellow person seems to have escaped Mr Meyer in this circumstance. But rather than me elaborating, I'll quote a post from a compassionate person who responded to Mr Meyer's article directly on the World View Weekend website which I thought was a very insightful comment about government responsibility:

Why is it we are told by religious conservatives that it is our Christian duty to get the government to follow biblical commands on moral issues but that we shouldn’t do the same for the biblical commands about helping the poor, widows and those from other countries. The commands in the OT to ensure that widows and sojourners (i.e. immigrants) were provided for were given to Israel as a nation, and it is OT Israel that conservative Christians seem to compare America to. So why should those commands not apply to the American government in the same way they applied to the government of Israel?

I could go on and on here, but there was one final sentence that stood out. I would encourage Mr Meyer to go to an old, run-down project in New York and say this:

Our poor in America are well off relative to the poverty in other nations.

Inevitably my opinion of Mr Meyer has drastically changed since reading his latest article. A man who I previously thought was well meaning but untravelled and misinformed seems now to have shown his true colours. What little respect I had before for his convictions has flown out the airlock, especially since he thinks poor people are "beggars".

Government policies should create a tide to lift all sea-worthy boats, not kill the gooses laying the golden eggs to provide a beggar’s banquet for a day.

I guess it's easy for someone like him to be angry over financial benefits bestowed upon poor and disadvantaged people when he is in no need for it himself.

I sincerely hope I'm wrong about you Mr Meyer. 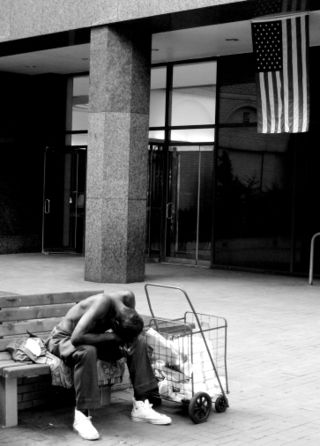