I love going on Wikipedia and seeing new photos pop up of old ocean liners I obsessed over as a kid. Below we have the top landing of the RMS Aquitania’s Grand Staircase, uploaded by the Royal Museums Greenwich: 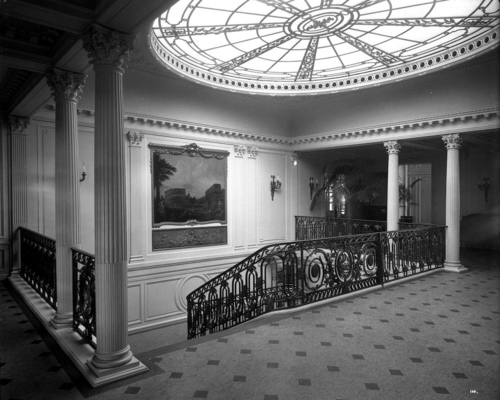 Compare this design to the dramatic Grand Staircase on the Olympic-class ships of the time that are mounted against the far wall, as everyone would recognise now thanks to the Titanic movie. On those vessels the stairs start symmetrically from either side and fan out to the floor below, as opposed to spiraling down a stairwell. Aquitania’s looks understated by comparison and, dare I say, I might prefer it.

The RMS Aquitania was built by Cunard in response to White Star’s Olympic-class ships that were slower, but bigger and more luxurious than their Blue Riband-holding Lusitania and Mauretania. Those ships had a similar staircase to Aquitania, but integrated a lift in the interior space around the stairwell. She was launched in 1914, and saw service in both World Wars.

I always thought Aquitania had a fascinating design; as if the Lusitania had been scaled up to Olympic’s size with clear design elements from both. I might write a post about that at some point.