This is part five (already!?) in my Commodore 128 series. I wrote about Retr0bright back in early February. To recap, involves buying new capacitors. Ah, that was so good.

Retr0brigting is a process that was discovered to reverse the bromide-yellowing of plastics. The Commodore 128 that Screenbeard of Mastodon and Geekorium fame gave me was already in excellent condition, but the keyboard was a different shade to the case pieces. I’m not bothered by a bit of yellowing from age, but I thought it’d look nicer if the pieces match.

(Hi, it’s Ruben here, from The Future. I can’t find my “before” photo of the 128 anywhere! I didn’t want this to delay uploading this post, so for now imagine a Commodore 128 with a beige case and yellowed keycaps).

The original Retr0bright recipe called for hydrogen peroxide from hair dye developer, some laundry booster as a catalyst, and xantham gum to create a paste that could be applied to the case. I bought some cream developer from Priceline in Sydney that seemed to do the trick for all three, but then I started reading reports of marbling and inconsistent results on smaller pieces like keycaps. Retr0brighters on YouTube now recommend submerging the pieces in warm water and liquid hair developer. Problem was, I could never find any non-cream developer in Australia, and ordering hydrogen peroxide through the post seemed like… a bad idea!

The solution—wow, I’m on fire with these puns today—came from a forum or blog post that I’m also blanking on right now unfortunately. But they pointed out that Oxy Vanish powder contains a sufficiently-high concentration of sodium percarbonate which, when mixed with water, forms hydrogen peroxide. The chemistry checks out.

Hydrogen peroxide is nasty stuff. By attempting this yourself, you agree to have read my site disclaimer and accept full resposibility for your safety and decision to do so. I suggest gloves at a minimum.

I gave it a try, or at least attempted to. What proceeded was more than a week of overcast weather in Sydney. I posited that it was the universe conspiring against me! I could have got some UV lamps, but our balcony normally bakes in sunshine so it seemed like a waste. I also had plenty of other things to fix and clean in the meatime. 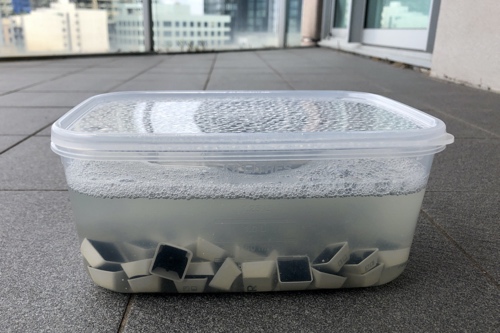 Eventually we had a clear day with plenty of sunshine, so I placed the keycaps in 1 L of warm water and 50 g of the Oxy Vanish, and let it sit for 6 hours. I couldn’t tell any difference, which was disheartening.

On the next day of sunshine, I upped the concentration and the size of the container. I thought I might not have left enough surface area for each keycap, and the solution might not have had enough of the hydrogen peroxide. I left it out for the same amount of time, and Clara helped stir it while I went to a work appointment. 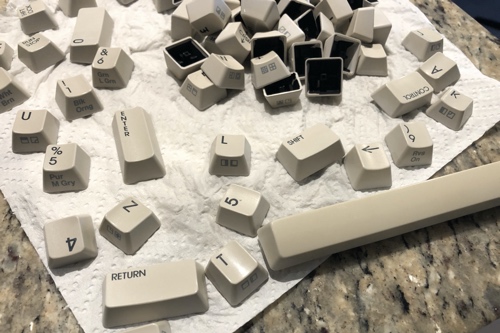 The difference was dramatic. The “top deck” chocolate look of the caps was almost completely gone! The spacebar key was still a bit yellow, so I’m going to give it one last treatment. (With hindsight, I didn’t do an especially good job with “before and after” shots here, but I couldn’t be happier with the results).

In the meantime I added the keys back to the C128, and it all matches! Maybe if I did the whole case and keys a few more times it’d match my little second-hand VGA LCD I bought in Akihabara for my DOS and Commodore machines, but again my aim was just to have all the parts on the Commodore match. 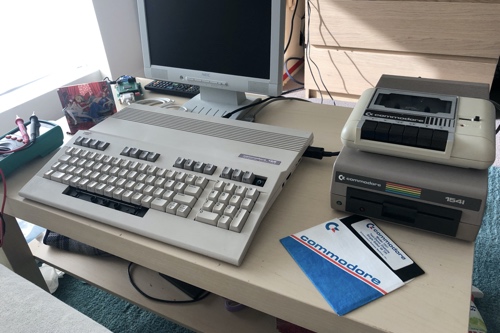 I have a replacement function key, spring, and plunger in the post from a friendly seller in Hungary, and the spacebar key will be added back soon. Now back to getting this stubborn 80-column VDC working!