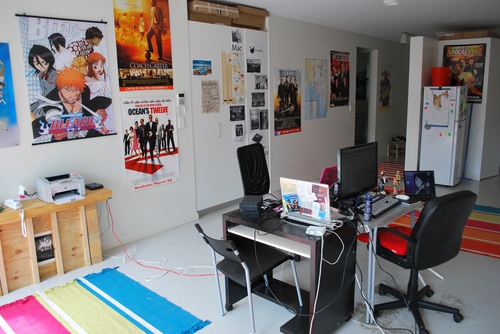 We just had our student house inspection for our rental property here in Awesome Mawson (I thought I was so clever when I came up with that) and after the regular checking of each room for damage and booby traps, the woman wrote on the form "house in excellent condition".

While the rent is a bit higher than I would like, I think it's worth it to have a great landlord and a realtor who talks to us like human beings not cash registers. When I used to live in the Mertz UniSA student housing they were also pretty good, but a few other houses in Mawson and Pooraka I shared with folks after that were made almost living hell because of landlords. I used to think it was interesting they could let faulty hot water heaters slide for weeks in winter, but if we were late for a payment we'd get rude calls that afternoon. I guess it's like insurance companies that demand payment but don't pay out, or talking to that cute Japanese barista only to discover she's been in a relationship for three years with a Caucasian guy who bears a striking resemblance to Jamie Cullum. D'oh.

For the next few days it's going to be great living in a house that looks like a page from an Ikea catalogue (certainly that's where the furniture is all from!) before the inevitable mess creeps back. We're very clean, but not the tidiest people on the planet :).

Speaking of which I haven't made a pointless trip to Ikea for a hot dog and WiFi in a while.