While studying in Adelaide for a couple of years, I moved out of the student dorm and into a share house with some friends. We needed some furniture. The default IKEA option wasn’t there, so instead we went to Le Cornu, a sprawling complex just outside the city.

Their showroom was spectacular. Coming through the glass doors you were presented with a giant steel warehouse, complete with a piston aircraft handing off the rafters for reasons I never asked about. Mattresses were stacked along the wall, and furniture was laid in in neat grids, interspersed with miles of red carpet.

To the left were a series of dark corridors flanked by small showrooms featuring completed bedroom and dining room sets. The furnishings themselves were contemporary, but the layout hearkened back to the 1970s when it first opened. That time period was carried over to the staff’s red blazers, neon signs, and junk mail catalogues.

It was one of the more surreal places I’d ever been.

What struck me aside from the retro look was how empty it almost always was; often we’d be the only ones there. So it perhaps was no surprise the company was bought and wound down in 2016.

I bring this up because a friend shared this image taken by FloatingYourGoat and posted on the Adelaide subreddit: 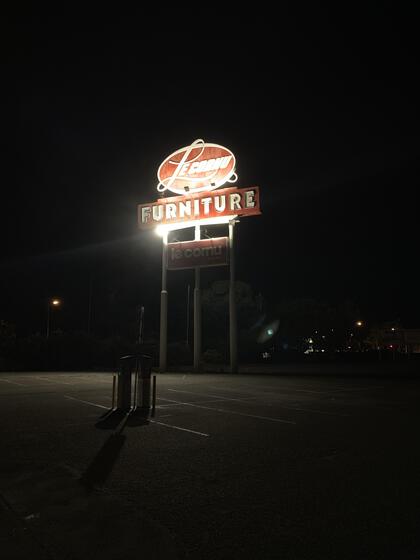 Despite being closed for a few years now, the sign is still illuminated at night. It almost seems fitting.