Update: Someone with a locked Twitter account messaged surprised that I’m a Mac user, given they know me from BSD circles. I sure am. I’ve had my feet in both camps since school. In some ways I can use my Macs because I have a rock solid FreeBSD box to delegate critical stuff to.

This is a post I wouldn’t think I’d ever write, or more accurately type. I resent the idea that written words are somehow more meaningful than typed; even ignoring accessibility concerns, some of us express our creativity and thoughts through keyboards not pens.

And it’s that kind of Apple person who’s happy and, above all, relieved to hear about the new Mac Pro. I’ve had PCs running FreeBSD, NetBSD, and various Linux flavours for as long, but I’ve also had a foot firmly in the Apple camp since they were rocking PowerPCs and CRTs. And I feel people like me have finally been listened to, after more than half a decade of lip service. 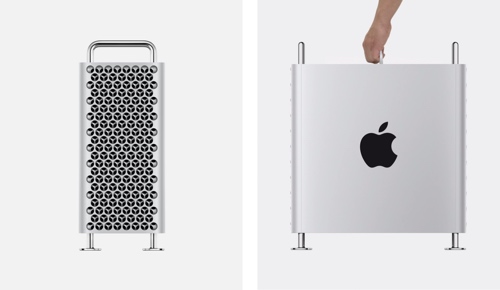 Unlike the cylindrical rubbish bin in name and nature, the 2019 Mac Pro feels like the true replacement of the original Mac Pro, and a worthy addition to a long line of professional Macintosh computers. As I wrote about in 2012:

People have been whinging about the “dated” Mac Pro case which was borrowed from the original PowerMac G3 in 2003 (of which I also owned at one point). All one needs to do is spent five minutes battling with the cables in a regular PC chassis to appreciate how wonderfully simple it is to add components to a Mac Pro.

Then the rubbish bin came out, and I lamented the inevitable rise of cable spaghetti mess. Then the lack of expansion became more apparent. Then it wasn’t updated. Then we were assured it would be. All it took was six years.

Lack of expansion and ability to upgrade
The previous rubbish bin Mac was so limited in that regard, you may as well get an iMac.
Lack of focus
We were all worried the Xeon/ECC iMac Pro was the de facto replacement for the Mac Pro, which it most definitely wasn’t.
Lack of interest
Apple hasn’t been a stranger to letting certain product lines languish, but the Mac Pro was beyond laughable.
Lack of whimsy
Apple have lost that a lot lately, from removing the happy startup chime, to that puff of smoke when you remove a Dock icon. This machine has giant steel handles, the option for wheels, and the top handle for removing the internals is a giant smiling face!
Lack of cheese grater
I loved the industrial design of my original Mac Pro and the PowerMac G5 tower that inspired it. It’s great to see them return to what made those earlier cases great.

I likely won’t be buying one, largely because I’ve shifted my processing to a FreeBSD tower with ZFS, the only OS/file system combination I trust with my photos and other memories. I also want to be able to eat.

But I’m relieved Apple is thinking of pro users again, and more importantly, they’re willing to release unapologetically awesome hardware again. It’d had started to feel as thought Apple couldn’t, not that they didn’t choose to.