The IT world has been consumed with thoughts around this proposed IBM Red Hat buyout. But buried towards the end of the release notes for 7.6 of Red Hat Enterprise Linux was this bullet point:

This feels like the end of an era as well. Red Hat was my first foray into Unix-like operating systems; I bought the carton from Challenger in the late Funan Centre in Singapore, brought it home, and installed it off its many CD-ROMs alongside Windows. I suspect plenty of you have a similar story.

What I haven’t ever really mentioned in my repeated reminiscing on this was my choice of desktop environment. Even in the late 1990s one could choose between the default Gnome environment and KDE. The first time I installed both to try, but quickly chose KDE. I didn’t know about the Qt/GTK split, or licencing backstory, I just thought KDE was more feature complete, attractive, and cohesive.

That carried through to my switch to desktop FreeBSD, until I jumped entirely to Xfce after using Cobind, a desktop that itself was based on Red Hat after the split to form Fedora and RHEL. 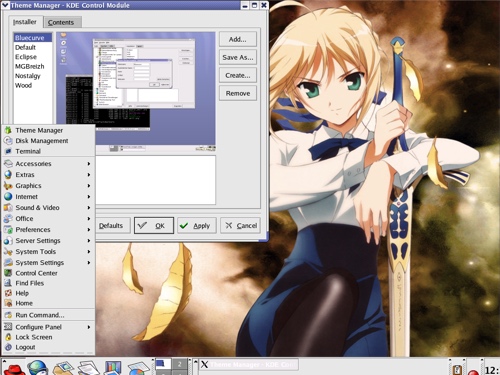 Ah Saber, you lent me strength through some troubling years! But I digress.

This discussion of desktop environments leads us to the Bluecurve controversy, pictured above. Red Hat in the early 2000s tried to unify desktop environments, window manager themes, and toolkits with a UI that almost matched. It was an enviable goal, but the execution left KDE fans like me with a feeling they were just trying make it look like Gnome. Later releases did a better job at integration, such that a layperson couldn’t immediately tell amaroK or Konqueror weren’t GTK+ applications. But those early days were rough, and foreshadowed Red Hat’s actions to come.

Anyway my point is Red Hat has a long history with KDE, and it was an important pairing in my own *nix journey. Despite feeling as though it didn’t get the prime billing or attention lavished on Gnome, the Red Hat developers still did a great job providing KDE; even if SuSE offered a better KDE-first distro.

I can understand why they’ve done this, but I’m still a bit sad.