I spent a not insignificant amount of my childhood reading atlases, the country sections of encyclopædias, and CD-ROMs. Give me a flag, or the shape of a political border, and I can almost certainly tell you what the country is. It’s probably only good for party tricks or quizzes, but still! I like to think that if I never got into IT, I’d be a cartographer.

I realised though that for all my obsessive reading, there were small pockets of the world I missed. So I’m rectifying it now thanks to Wikipedia’s Country Portal, the CIA World Factbook and my vintage computer with the DK Multimedia Reference Atlas for comparison.

This month I’ve been looking again at the Caucasus. There are so many fascinating places and intricate demarcation lines cemented from thousands of years ago, to relatively recently. The shape of that land wedged between two large inland seas must surely rate as one of the most geographically unique and beautiful in the world. Check it out in OpenStreetMap, and just spend hours panning around and zooming in.

Politically speaking, the region also has a disproportionate number of unique writing systems, enclaves, autonomous states, and limited-recognition countries, thanks most recently to the history of the Cold War. I can’t stop looking at this street photo of Stepanakert in Artsakh taken by Govorkov in 2013: 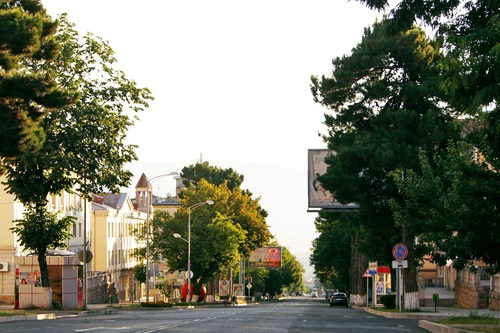 The Artsakh Republic is a predominately-Armenian region that claims independence from Azerbaijan. The geometric shapes of their Armenian-inspired flag look almost South American, I like it.