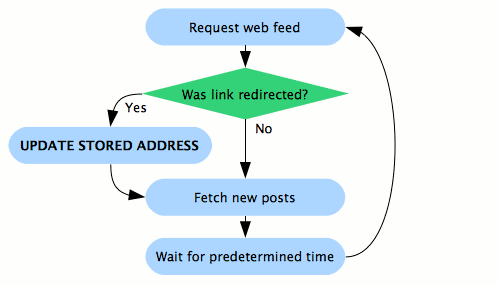 Here's an idea for a Google Reader feature that in my opinion is long overdue. If Reader attempts to fetch a web feed and it encounters a 301 permanent redirect to a legitimate new address it should update its own records in user accounts to point to the new address instead of still pinging the old one.

I ask for my own selfish reasons because as of now more people are still subscribed to my blog here through the old //rubenerd.com/show/feed/ address instead of //rubenerd.com/feed/. Each request to the old URI takes more effort and bandwidth than the new one, and I've noticed items that appear in the new one instantly can sometimes take an hour or longer to appear in the old one. An automatic update would fix this.