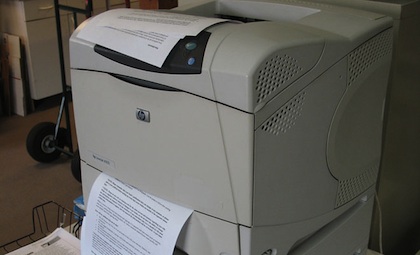 A photo of Josh Nunn taken by tstadler on Flickr

Every so often you read a blog post by someone that talks about an issue so close to you and using words you would have used that it's not only spooky, but makes you think there's a secret evil conspiracy going on. I accuse Josh Nunn of orchestrating such a conspiracy this evening with his latest blog post.

Despite his above average awesome name which I can only assume he legally changed to from a far more boring, generic name, Josh Nunn seems to be suffering from something many of us who pour so much effort into online endeavors have. He doesn't get as much feedback as what his posts deserve. Okay I admit I don't have that problem per se because my blog here on the whole is so terrible the posts don't deserve comments, but still!

If you spell Zero as Zer0, it self references. Trippy!

First, and it's a rude and nasty thing to do, but it helps to put things into perspective. Estimates place the internet at having several trillion pages, with billions added daily. In this kind of competitive environment, unless you're Leo Laporte or someone else in the top 0.000000001% of bloggers having any comments on your blog at all is not only amazing, it's a statistically, mind blowingly amazing achievement!

Coming back down to Earth though, I do know what Josh is going through, for years I used to lament the relative lack of comments on my blog here given I spent close to an hour each day writing posts for it. With the exception of Alex Lindsay, John Dvorak, Brent Spiner, Marian Call and Dave Winer I've also never had any feedback from any comments I've sent famous people (a relative term in itself) on Twitter, and I've uploaded thousands of photos on Flickr over the years and have only had a handful of comments.

I think a large part of it has to do with what you want to get out of your online activities. My goal when I first started blogging here was to voice my frustration with high school life, then when I graduated it became a site where I'd write about what I'm learning in my spare time because I was so disillusioned with how useless university was, then it became a mixture of trouble shooting problem solving and utter nonsense. Once I realised that's what my ambition was, having fewer comments didn't feel as bad. In fact it meant the few comments I do get feel more special and awesome, if that makes sense!

Despite his assertions to the contrary, Josh has been able to maintain a far greater degree of cohesion over on his site; his posts are interesting and often very useful, and the conversational tone of the posts makes you feel as though you're speaking to a knowledgeable, quirky guy instead of being lectured by some second rate professor who only started teaching to get a paycheck and his name in gold leaf on a door with rusty hinges. He implied his writing style was at fault, but I swear to him right now that if he changes it I'm going to be cross, mad and angry, simultaneously and at the same time. Both.

I was going somewhere with this.

So to be a completely useless arse, to a certain degree I know what Josh is going through, but as of yet I don't have a answer on how to deal with it. Perhaps the reason why it doesn't bother me as much anymore is blogging has become a coping mechanism for my own problems, rather than a cause of worry.

I really had high expectations for this post, I was going to make both Josh and I feel better about our common problems, but in the end I just talked about arses! I'll attempt this again tomorrow when I'm not half asleep :).

Feel free to leave some comments over at Josh's blog though if you something [more] constructive to say.