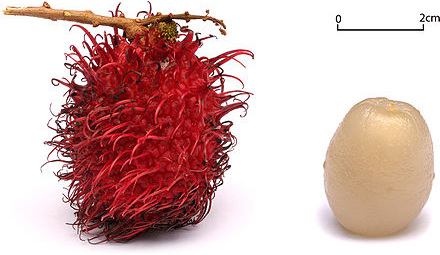 Today's Wikipedia photo of the day is a photo of a rambutan by Muhammad Mahdi Karim. For your consideration, an entirely pointless post of nostalgia!

Moving to The Singapores

When my family first moved to Singapore when I was a small child, I had no idea what to expect. We'd watched plenty of travel shows about the city state and the introductory videos my dad's company had sent us in the mail, but videos and travel books and whatnot simply can't prepare you, even though arguably Singapore is the most Western country in Asia!

Funny story, I was sitting at Starbucks in the city here yesterday, and I overheard a guy commenting that Singaporean girls and guys make better partners than Japanese because they speak English. I made no comment.

Anyway for the first few years as a kid I absorbed very little Singapore culture and cuisine. For better or worse depending on your point of view, Singapore makes it very easy to live as a Westerner and never experience anything Asian; its actually quite a contentious issue when you talk about so called "foreign talent" to some local people. You can understand why.

For some reason though around the time I turned 14, something inside me clicked and I started to change. Suddenly I wanted to explore and try new things! I turned off the cable TV and started watching local TV shows, I started going to public libraries and mingling with local people instead of sitting at the Australian International School library, and I started trying local food.

My parents had always had a huge obsession with Indonesian food, art, music, dance and culture which gave me a gentle introduction, but by the end of the year I'd tried Shanghai noodle bars, Cantonese, Korean, Japanese, Indian, Thai, Vietnamese and Malay. My mouth is watering remembering all this stuff, if you want to try the absolute best Asian AND Western food, its ALL in Singapore, let me tell you :).

Anyway I belabour all this to tell you about the rambutan. They're slightly larger than the Wikipedia picture would have you believe, but they're still fairly small. Surrounding the fleshy middle which is almost the consistency of a grape but without the skin, is the hairy outer part that's surprisingly thick. They're really sweet and delicious!

I tried my first rambutans in fruit salads, but I started eating them in their own right after I turned 14, and soon developed a small obsession. I confess to liking lychees a little more now (especially in bubble tea!) but I still have a soft spot for them. You could say… a sweet spot!

End with The Wikipedias

Given I started this post with a rambutan photo from Wikipedia, it only seems fitting to end it with a Wikipedia quote from the rambutan article!

The rambutan is a medium-sized tropical tree in the family Sapindaceae, and the fruit of this tree. It is native to Indonesia, Malaysia, The Philippines, Sri Lanka and elsewhere in Southeast Asia, although its precise natural distribution is unknown. It is closely related to several other edible tropical fruits including the Lychee, Longan, and Mamoncillo. It is believed to be native to the Malay Archipelago, from where it spread westwards to Thailand, Burma, Sri Lanka and India; eastwards to Vietnam, the Philippines and Indonesia. The name rambutan is from the Malay/Indonesian word rambutan, which literally means hairy caused by the ‘hair’ that covers this fruit, and is in general use in Indonesia, Malay and Filipino.

There is a second species regularly for sale at Costa Rican markets which is known as “wild” rambutan. It is a little smaller than the usual red variety and is colored yellow. The outer skin is peeled exposing the fleshy fruit inside which is then eaten. It is sweet, sour and slightly grape like and gummy to the taste. In Costa Rica, it is known as mamón chino due to the likeness of the edible part with Melicoccus bijugatus and its Asian origin.