ASIDE: Within five minutes of this post going live I received a message from Vannesa Choi in Taiwan saying that I can filter out a lot of Rails related results by specifying eRuby specifically instead. I still get lots of Rails results, but certainly much less than before. Xie Xie :)

I've been learning Ruby for a while now and have started moving from Perl to it in recent months as my primary tool for solving most of my day to day problems (alas, just with computers, real life is the next step!). With all I've picked up I've now decided to use Ruby in web development and replace my PHP powered sites other people have coded over to an eRuby FastCGI powered site I code myself (I got part of the way through a similar project a few months back, but life got in the way again and stalled it!). What was the quote that Google put on it's Google Code adverts? "Computer Scientists don't adapt other people's code, they create their own!"

Anyway the problem I'm having with finding quality documentation online for Ruby web development is the exact opposite problem I had when I first learned about CGI using Perl back in 2004: there's too much of it! But in an ironic twist, just as the sailor stranded at sea in a lifeboat can't drink the water despite it being all around her, all the documentation I'm finding is all about Ruby on Rails! Even the O'Reilly book on Ruby proudly proclaims it to be the language that powers Rails! 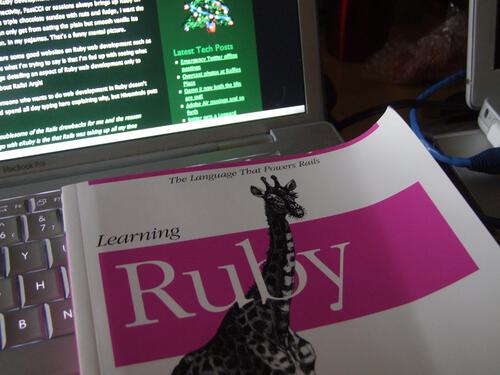 Virtually every search I perform for Ruby development in books, online or even talking to people, whether it's for MySQL connectivity, FastCGI or sessions always brings up Ruby on Rails but not Ruby! I don't want the triple chocolate sundae with nuts and fudge, I want the wholesome Ruby goodness you can only get from eating the plain but smooth vanilla ice cream. From the tub. With a spoon. In my pajamas. That's a funny mental picture.

Now don't get me wrong, there are some good websites on Ruby web development such as Hiveminds in the UK, but I guess what I'm trying to say is that I'm fed up with seeing what appears to be an excellent page detailing an aspect of Ruby web development only to discover that they're talking about Rails! Argh!

I guess one could ask why someone who wants to do web development in Ruby doesn't want to use Rails, and I could spend all day typing here explaining why, but Hiveminds puts it very eloquently:

One of the most troublesome of the Rails drawbacks for me and the reason that I decided to go with eRuby is the that Rails was taking up all my time with Rails problems and troubleshooting. I was learning a lot about using Rails but not much of the Ruby programming language. Someone suggested we go with CGI instead and while researching this we found eRuby.

eRuby is a much easier way of using, learning and getting the power of Ruby on to a website. With eRuby deployment is a easy as uploading your files to your web server. This is to say deploying an application or webpage is no harder in eRuby than it’s counterparts like PHP or ASP. I honestly believe that if Ruby popularity is going to increase that eRuby will be the reason. Unlike Rails eRuby has a very shallow learning curve and does not require a lot of effort by web hosting companies to set up.

Now just in case you've got the wrong idea, I personally don't have anything against Rails and have even used it myself for a few projects, but for most of what I do it's overkill and when I'm looking for just Ruby material it can get tedious when you get superfluous information. But I am weird right?