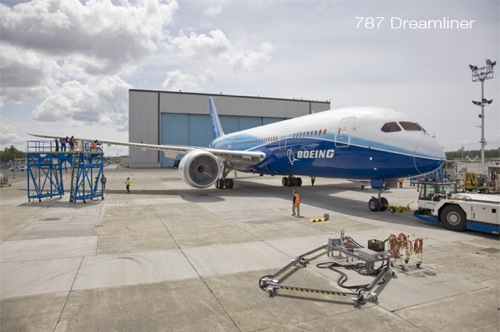 If I had posted this entry before my praise for Unicomp (Kudos to Unicomp), it would have been entry 1787, a particularly onerous number considering troubles at Boeing with their latest generation 787 Dreamliner. A sub-par segue I admit, but I did think it was spooky.

The news came early this morning in Sydney, that Australia’s largest airline, Qantas had made significant changes to its 787 order, deferring the 15 787-8s it was supposed to receive starting in mid-2010 for Jetstar, while [cancelling] 15 additional 787-9s scheduled for delivery in 2014 and 2015.

Qantas management claim this has nothing to do with the repeated delays for the 787, instead citing troubling economic times as the reason. I'm willing to give them the benefit of the doubt on this one, but I can't help but think these delays did have some bearing on their decision. On the other hand as a regular air traveller I would take designs thoroughly safety tested over well timed releases any day of the week!

While ultimately I'd much prefer to have high speed trains replace the bulk of air travel because they'd use less energy and would be more comfortable and fun, I think the 787 Dreamliner is a remarkable plane. If you haven't followed it's development, the fuselage is the first to be fabricated largely out of composite materials which is more lightweight and stronger than aluminium, and the uniquely shaped GE engines give similar thrust with less fuel consumption. We're really looking at the future here, at least I hope we are.