I dislike freeways, and not just because expanding them doesn’t work. But at least sometimes we can get some parkland after all the disruption that comes from their construction. Like getting a flower from someone after they’ve clubbed you with a wet fish. Some Monty Python references work better than others.

This proposed park underneath a ring road in Coventry in the UK looks great. It’d turn this part of a walking and cycling commute from a dingy chore to something I’d look forward to. 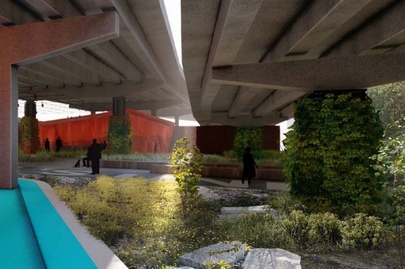 My only question when I see such plans is: how will the greenery grow without direct sunlight? I’d long assumed the reason why land under so many freeways were barren wastelands was owing to plants not being able to grow there. Is there foliage that can thrive in indirect sunlight? If so, those barren wastelands are a choice by their respective councils or governments, which we need to tackle.

Singapore is famous for all its trees, vines, and gardens they meticulously plant around freeways and other road infrastructure. Now that I think about it, a lot of that would be out of direct sunlight, too. Any horticulturists out there?

(It’s perhaps a bit ironic that the closest I’ve ever come to finishing writing a light novel had horticulturists as the protagonists. You’d think I’d know this stuff).