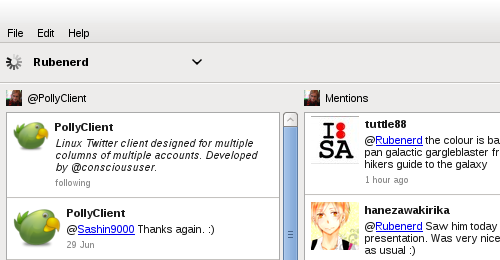 While Polly is understandably optimised for Ubuntu, it runs well enough on Fedora to still be my favourite multi-column Twitter client! Here's the quickest way to get it running.

Polly doesn't ship with an RPM, but we can install it ourselves without too much trouble. Head to their Launchpad download site and download the latest source tarball. As of writing, the latest is:

The tarball's README list dependencies for Ubuntu, but it didn't take long to find their Fedora equivilents.

And here they are on a single line to make installing easier. Depending on which spin you’re running, you may already have most of these.

These also bring in several dependencies, including:

Now it’s just a matter of extracting the tarball, and running the install script.

If Polly works now, you're done! Add your accounts, and tweet away!

Even with the latest alpha versions, Polly still refuses to load on any of my Fedora machines unless I restart gconfd-2 before I run it the first time. According to the GConf site, the safest way to do this (other than outright killing it) is:

The friendly Polly developers I've talked to on Twitter expressed surprise that this was still needed. This leads me to believe it's a localised Fedora issue, which means when I research this further I'll be filing a support ticket with them, and not Polly. We'll see.