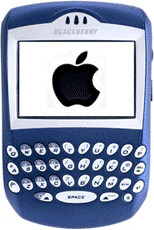 If you have a Mac and a BlackBerry (like me), PocketMac is indispensable.

More than 4 years after we began making unique sync solutions for the Mac, people still ask us, “Are you guys nuts?”
Only now they ask, “What Mac user would want a BlackBerry® device?”

And just as before, our answer is: All of them!

The BlackBerry device is one of the best devices and the Mac is the best computing platform.

Why not have the best of both worlds? That’s why we created PocketMac® For BlackBerry, the original Mac-To-BlackBerry Sync Solution

It still irritates me though that Research In Motion still refuses to acknowledge and natively support anyone who doesn't use Windows.