I don’t follow much anime anymore, so I’ve come to watch various channels over the years to keep on top of stuff that I might want to check out, and to keep at least a big toe in the weeb pool.

Anime YouTuber Gigguk had some sage advise for photographing cosplayers, starting with some facts that may come as a shock to certain attendees:

Be wary. It’s not a widely-known fact that cosplayers have personalities, emotions, insecurities, morals, and lives outside their costumes. So they’re almost like human beings.

I remember being at an early SMASH convention in Sydney and saw a guy in his early twenties just standing slack-jawed near a cosplayer dressed as Yoko Littner from the second arc of Gurren Lagann. He didn’t approach, or acknowledge her or her friend’s existence, he just stood there gawking. I know, because I did ask! 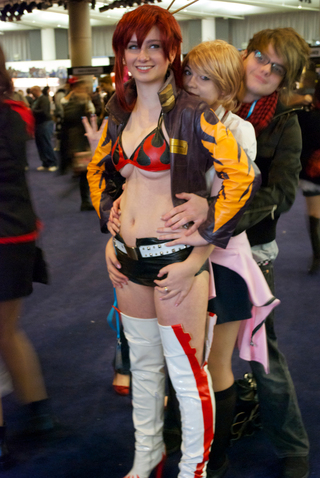 If you want to take a picture, the correct social etiquette is: go up to the cosplayer and ask politely if you can take a picture. Then awkwardly try to figure out where you’re supposed to put your hands.

Sarcasm aside, he raises a good point: respect your subject! Don’t be weird; or if you’re socially awkward, compensate by being polite. But Gigguk did miss two other critical points, which I know because I unfortunately failed to as well.

First, ask people you’re photographing if they have a public social media handle so you can attribute them. I find this less creepy than asking for someone’s name, given people may want to remain anonymous, or only share a specific identity when dealing with anime stuff. I wish I’d done this for those earlier events.

And second, attribute photos and art. Gigguk used the above screen to explain why you should ask for permission, but didn’t say who the cosplayer was. A reverse image search returned @annitheduck on Instagram, a German cosplayer who worked with @zeno_photography for her Yuzuriha Inori shoot.

I suppose respect does encompass all of this.