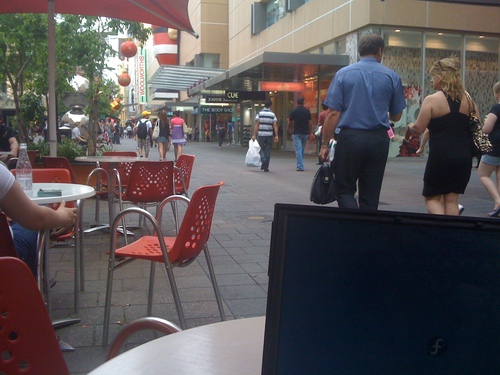 For a change of atmosphere after my exam, instead of going to the Boatdeck Cafe where I spend much of my Adelaide life, I decided to stay in the city and park myself at the Cibo Espresso in Rundle Mall. I'm a wild guy!

Coffee haunts aside, I had a point with this post. What continuously amazes me with some people is to the extent they'll tart themselves up for the most mundane or weird situations, such as for an exam. Having just left the Wayville Showground for my few hours of exam fun, I noticed more girls than not had skimpy but expensive looking clothes (ugh) and thick makeup on. Makeup! For an exam! I can barely cope with studying and going for an exam let alone caring that much about my appearance.

Hey, aren’t you that guy?

Adelaide really is a small place, I was just asked by a woman who saw me typing away on my laptop if I was the same fixture she sees at the Boatdeck Cafe in Mawson Lakes. I said yes, but looking back now I should have said I was a twin brother or a clone or something. Why is it we only figure out what to say after things like that happen!?

You were talking about your exam

Are you sure? Wait, let me check. Well looky there, I was. You're not as much of a witless half bright than I thought. Kudos.

Here's a tip for those of you who carry bags and have to drop them off at the aptly named Bag Drop: take a brightly coloured bag! Just as they help you to see your bag easier when you're at an airport and using one of those newfangled baggage carousel things that are fun to stand on, having a bright coloured bag means when you go to retrieve it the overworked staff can see it much easier and get it back to you. It's sheer, unmitigated genius I tell you. I almost spelt genius wrong.

Next exam is Saturday so I still have a ton of studying to do as well as dealing with ongoing family issues and a landlord who wants to sell the house out from under us. I'm going to savour this hour or so I'm sitting here. It's a good time to be outside, because tomorrow Adelaide will be 41C (over 100F I think). Glad it wasn't that hot today, I can tell you that much :O.