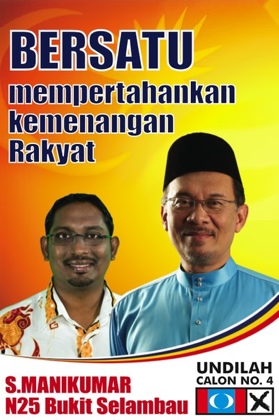 It’s official, S. Manikumar has won the by-election for the seat of Bukit Gantang for Anwar Ibrahim’s PKR (People’s Justice Party). From The Malaysian Insider:

The PKR candidate polled 12,632 votes to defeat the former Lunas assemblyman who managed 10,229.

This of course is a huge win for Anwar Ibrahim’s PKR party and a particularly embarrassing one for the embattled UMNO coalition which only just recently got a new leader in Datuk Seri Najib Razak who, I have to be frank, scares me a bit.

I barely lived in Malaysia for over a year, but I still like to keep informed with what’s going on. It’s proximity to and shared history with Singapore where I lived since the mid 1990s also means what goes on there has a rippling effect. Plus I want to know how it’s affecting my friends over there.

ASIDE: If you’re one of my regular readers outside South-East Asia and I’ve lost you with this post, I hope to write more about this and to do some more explaining sometime later this week.

In the meantime if you’re interested, Wikipedia’s articles on Anwar Ibrahim and to a lesser extent The PKR, UMNO and the Controversy section of the Bumiputra article give you a pretty good idea. To say Anwar has put up with and been the victim of political mudslinging is the understatement of the millennium.

Congratulations to S. Manikumar, The PKR and to Anwar Ibrahim. Merdeka!