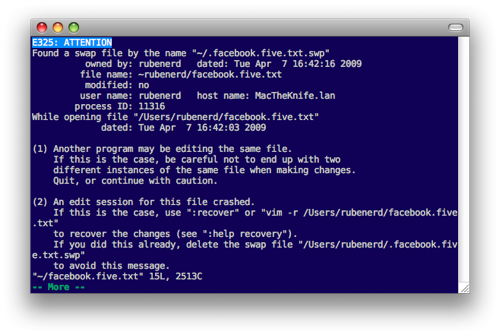 It seems deliriously (some of you might say schadenfreude) ridiculous that I would take so much time to create a follow-up post to my initial MacVim review and include some commentary regarding my forgetful nature… then forget to add something. Can banging your head on a table cause brain damage?

One more reason to consider MacVim if you’re looking for an all purpose text editor for Mac is a feature it shares with regular Vim: the ability to restore text files that were lost as a result of the program quitting unexpectedly. If you relaunch MacVim you’re asked if you want to restore the text file to the condition it was last in regardless of when you saved it.

As with most Mac applications MacVim has never crashed on me before, but that’s not to say I haven’t been the victim of an old battery that decides to turn the computer off!

That reminds me, I need to buy a new battery. This one is shot worse than a politically incorrect reference to Dick Cheney. Wow, that was over three years ago already?