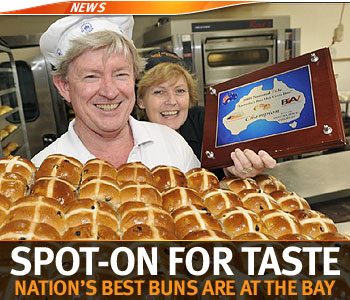 And now for something to do with computer software. If you want the best hot cross buns in Australia, you need to be in Adelaide people!

According to the article, they almost didn’t make it to the competition in Melbourne because they upstaged the grub on their plane… take that airline food!

"They were still hot, and the smell just filled the cabin."

"Everyone wanted them – stuff the airline food, they said."

And what was their secret?

Nick said the secret was to use local produce.

"We use good quality flour and Australian fruit. I’m convinced it’s the way to go."

People sometimes call me a local fruit. I tell them I’m not really local, I was born in Sydney but lived in Singapore most of my life. Flaw in their logic you see.