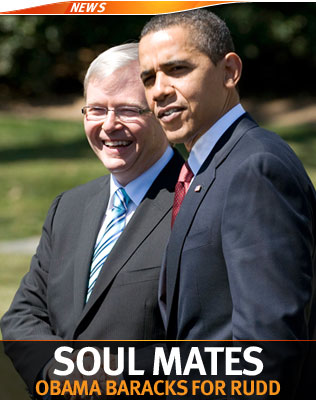 Reading the Adelaide Advertiser online this morning I noticed this photo of Kevin Rudd and Barack Obama. According to the article, Kev and Barack have had their first formal meeting which aside from some awkwardness regarding troop deployments in Afghanistan (which most Australian’s don’t support), it went really well. 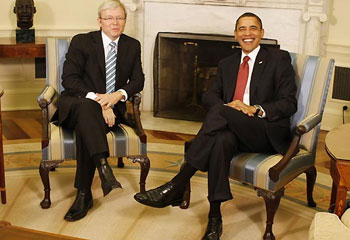 The US President has made much of his rapport with the Prime Minister after their first face to face talks in Washington. Reports of the meeting carried around the world have described the pair as political "soul mates".

"I think he’s doing a terrific job, and I’m looking forward to partnering with him for some years to come," Mr Obama said after meeting Mr Rudd for more than an hour.

Mr Rudd has said it was good to have the US "back on board" on world economics and global warming.

I just have to say this, right up front, that the relief I feel seeing our new PM with America’s new President is overwhelming. Whenever I saw photos of our former conservative PM John Howard standing with George W. Bush it made me shiver and cringe more than nails on a blackboard. To be fair, they were suited for each other! 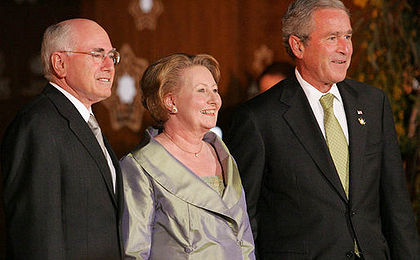