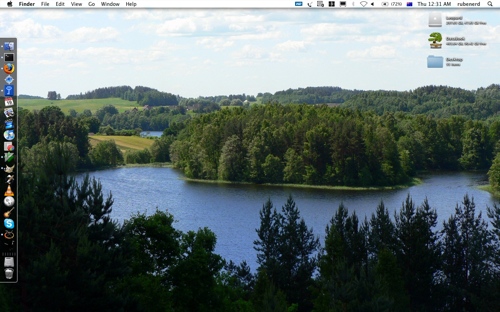 The breathtaking Aukštaitija National Park in Lithuania on my MBP desktop

Don’t you just hate it when you’re so tied up with work and studying that all you write on your weblog for two days is a lousy post with only one sentence on it? Fortunately this isn’t an example of this because this post clearly has two sentences. No wait, three.

That’s not to say we can’t share in something constructive and fun even though I only have five minutes before I’m due to go to sleep in… minus one hour. Bummer. Taking a break from using cute introverted anime characters as my desktop backgrounds, I’ve settled on this stunning photo of the Aukštaitija National Park in Lithuania. User:Wojsyl on Wikipedia was generous enough to upload his photo at 2560×1920 so it will scale down beautifully on most resolution monitors.

While everyone else chose to do their year 11 and 12 high school economics reports on countries like China and Australia, out of the blue I decided to study the Baltic states. A tactic just to make my reports different from the others in our little group ended up fuelling an interest outside of school in me for this part of our tiny world, at some point I’d love to tour around there. A very, very close friend of our family is from Latvia originally; I remember shortly after my mum passed on and we were back in Sydney for the funeral I talked for hours with her about Riga and how much it changed since the fall of the Soviet Union. I could have talked for much longer about it!

I’m aching to do some travelling. First things first, get on track with my degree again!