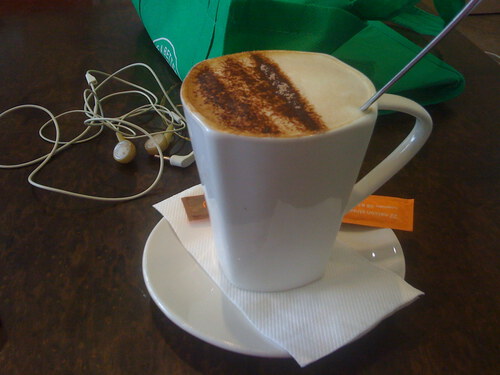 UPDATE: This post was originally written yesterday on Sunday, but I hit the "Save Draft" button instead of "Publish". Looking back at it now, I wish it were still Sunday.

I’m sitting here at the Boatdeck Cafe this Sunday afternoon with just my iPhone and a stable wireless network. Sometimes I need to lug the glorified monitor and keyboard stuck together, but today just typing on this feels fine.

It is definitely starting to show that it’s Autumn here in Adelaide; after almost every day being as hot as Singapore when we came back here, this weekend has been in the low 20s and drizzling. To the astonishment of many a person in the real world and online I’ve readily admitted I prefer overcast days; there’s something about them that allows me to relax more. Perhaps it was the positive cool change overcast days have on tropical climates that made me think of them positively.

As for today, despite university now being back for a fortnight now I’ve still been having a nagging enrollment issue that I thought would have been fixed but clearly not, so I had intended this afternoon to work on that, but unwittingly I forgot the online enrollment system isn’t functional on Sundays! Or at least the part I’m trying to access. I still haven’t even got a new student card yet!

So to be productive I’ve been watching some more Code Geass and going to the Boardeck Cafe! I figure my life is so dreadfully confusing and filled with anxiousness and dread that a Sunday where I only have a few responsibilities is, for an Atheist wanting a better word, a godsend! Plus it’s overcast, good times! I’ve also finally recorded a Rubenerd Show again, the first since coming back to Adelaide. I had forgotten that I was supposed to be keeping shows under 10MiB so people on iPhones and iPod Touches (the phrase "iPod Touches" just doesn’t sound right, if you know what I mean) can download them on mobile phone networks, so I rambled on just as I’m doing here without any thought to the time until it was just time. The result was I had four things I wanted to discuss and I ended up discussing one thing, then getting sidetracked and talked about something else! Good times.

Well that’s my Sunday! Now if you’d excuse me, I’m going to turn to the Stanza iPhone app and continue reading The Counte of Monte Cristo [Wikipedia] while I finish my Mugaccino. Sundays are fun.