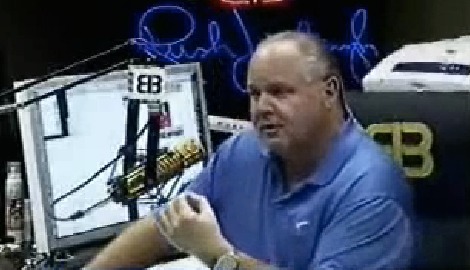 Because I read so many people’s shared items in Google Reader I’ve been catching a lot of news stories and opinion pieces from all over the place, it’s been really interesting and lots of fun.

For many of my American friends, lately the one person who seems to be coming up a lot has been this guy called Rush Limbaugh. Sparx especially has been sharing lots of opinion pieces exposing this American radio personality who’s apparently become the de facto spokesperson for the Republican Party, one of the two biggies in American politics. The more I read about this guy, the more I’m pleased nobody I talk to here in Australia knows who he is, because people like him live off thinking they’re famous and important!

Rush has been quite a colourful character to say the least. The first photo I saw of him, he looked (to use one of my sister’s terms) "harmless", sitting in his radio studio smoking his cigar, he even has an Apple computer sitting on the desk next to him! I thought the neon tube outline of his name on the wall looked a bit cheap and tacky, but hey we all have different ideas on interior decorating, right?

Update 2019: The original video embedded here is no longer available.

Typing his name into Google and watching a few videos of him made my "harmless" opinion of him change somewhat. The scareist video was a Keith Olbermann opinion piece (a really sharp political commentator in the US) that I embeded above where he talks about Rush’s cheapshots at Michael J. Fox’s parkinsons condition which ironically backfired and proved just how little he actually knew about what he was talking about. I’ve seen low, but this is low low low. Rush is a jerk. And Michael J. Fox response was amazing.

Suffice to say, I don’t really know who this Rush person is, but if his negative reputation is as deserved as people I trust like Sparx say it is, I’m not bothered by the fact that I don’t listen to his radio show. And for the sake of stroking his ego, this will be the first and last post I ever dedicate to talking about him… I suspect I’ve already given him more than he deserves.

To my American readers, do you use the term "windbag" over there? I get the feeling it would fit pretty well! I’d also say "eejit", but I’m not sure how that’s spelt and I don’t like using words here that I have to lookup first. Hey wait, I already did.

Good on you Mike, we need more people like you.